As I’m writing this it’s still Christmas Eve (but it’ll go up after midnight, officially on Christmas Day).  It was a few years ago that my friend (and bass player in the band Potter’s House) Paul Hollis died of Hodgkin’s Disease.  I still miss him.  I think about him every Christmas Eve and play the Potter’s House CD that I have, as I’m sure I’ve mentioned here before.  So this is my yearly tribute to him.  — Paul, if you get to read blogs in Heaven, I still love you, brother.  Your bass tone’s still my favorite I’ve ever heard and I’m still trying to sound like you did.  Merry Christmas, man.

But, enough of the maudlin stuff.  Don’t wanna bum anyone out for Christmas.  (For the record, it doesn’t make me sad to think about it.  It’s actually kind of comforting.  Don’t know why.)

Since this is officially going up on Christmas Day, I want to wish all of you a very merry Christmas and I hope you get all of the stuff you asked for…y’know…unless you’re Jewish or Muslim or something…then I hope you get stuff on whenever you’re supposed to.  🙂

In tribute to the holiday, I’d like to share with you a couple of cell-phone snapshots of something I drew on the office whiteboard.  My whiteboard art skills are almost above reproach.  🙂

I’m particularly proud of the manger scene, so here’s that on its own: 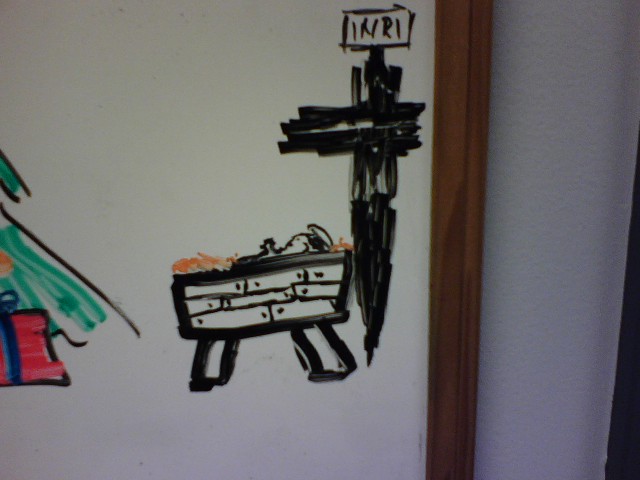 And Here’s your George W. Bush Picture of the Day (26 days remaining in term):

This one’s been all over the Internet, and it’s more of a Thanksgiving thing…but it’s as close as I could get to a funny Christmas picture…